Every year for my entire life I have had my grandfather’s Christmas Coffee Cake for breakfast on Christmas morning. Okay, maybe not this first year, when I was only six months old, but I’m sure the following year I was cramming that delicious cake into my cute little mouth by the fistfuls. 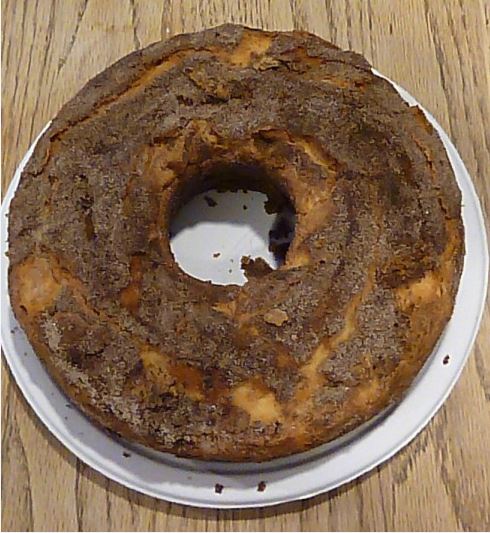 I try to bake as many coffee cakes as possible right before Christmas to give away. What I desperately need is a second bundt pan so I can have batter waiting on deck and ready to go as I take a finished cake out of the oven instead of having to wait (at least) half an hour for the cake to cool and slide out of the pan so I can start another cake. Sometimes I don’t wait long enough and disaster strikes.

If I may humblebrag, I must tell you that everyone raves about my coffee cake. Raves! (Wait, that was just a regular brag, wasn’t it?) Well, it’s not really bragging, because honestly, it’s so easy anyone can make it. All you need is the recipe. And luckily for you, I’m not one of those rude recipe hoarders. I’m very generous. So this Christmas (and Hanukkah and Kwanza and Festivus) my gift to you is the recipe to my grandfather’s amazing sour cream coffee cake.

Put cake batter ingredients together in a large bowl and beat with a mixer for 2-3 minutes until it’s thick, but fluffy. 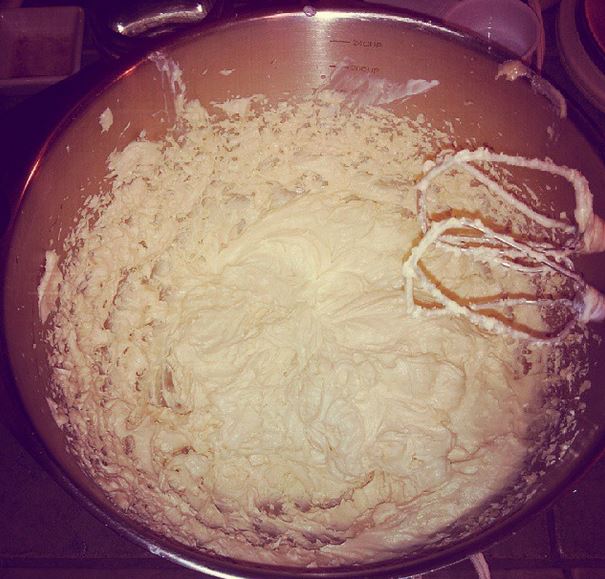 Spray a bundt pan (the flat sided kind, not one of those pretty fluted ones) with cooking spray.

And when I say spray, I mean spray the sh*t out of that thing. Think you’ve used enough spray? You haven’t. Spray it again. This is a thick, gooey cake and it needs to swim in cooking spray. Trust me, if you don’t use enough spray (or don’t wait long enough for it to cool), you get this:

Or you can do what my grandfather did and use Crisco. That probably works better than cooking spray, but I don’t have any of that crap in my house.

Take half the batter and spread it evenly across the bottom of the pan. Sprinkle half of the cinnamon mixture on top.

Tip: if you are using the cinnamon mixture without the walnuts due to a nut allergy or no-nut preference you might want to double the amount of the mixture. (I think the cake is better with the walnuts, but Chandler is allergic to them so sadly our cakes are nutless.)

Now comes the semi-tricky part. I know, I said this recipe was easy, and it is, but this next part takes a tiny bit of finesse. But just a tiny bit.

Spread the rest of the cake batter on top of the cinnamon mixture. The trick is keeping the mixture in a nice line and not mixing it with the batter. I do this by dropping several blops of batter onto the cinnamon and then spreading it together.

If I was one of those popular food bloggers, I’d have a picture for you, but I’m not, so I don’t. Seriously, you should consider yourself lucky that (1) I’m giving you this recipe in the first place and that (2) I took five minutes to make the bundt pan pictorial above. Use your imagination about the blopping and the spreading and stop complaining.

Where was I? Oh, yeah, the cake. Carefully spread the rest of the batter and then top with remaining cinnamon mixture.

Place in pre-heated oven and bake for 55-65 minutes.

Once done, let cool for at least a half an hour. At least. Then take a knife and go around outer and inner edges. Place a plate on top of bundt pan and carefully turn upside-down. Listen for cake to gently plop down onto the plate. If it doesn’t drop down right away, gently tap the pan. If it still doesn’t drop down flip it back over, go around with the knife again, flip it back and tap again. If it still doesn’t drop, bang it on the table while crying and cussing and wondering how the hell it is still stuck in the pan when you used half a can of Costco-sized cooking spray. (Not that I’d know anything about that.)

Lift bundt pan, put another plate on the bottom of the cake and carefully flip back over.

It should take an average family of four about half an hour to devour the entire thing. I hope you left your oven on. You’ll be needing a second one.