I cried the night of the election, but I haven’t written about it. I didn’t post one thing on Facebook. I haven’t even tweeted.

“Trump apparently thinks the P in EPA stands for pollution instead of protection” recently sat in my little tweet box for hours when Scott Pruitt was announced as Trump’s pick to head the EPA, but I hit delete instead of post. (Also considered: “Trump does things bigly: Why just fuck the U.S. when you can fuck the entire planet. #ScottPruitt”) But I just didn’t have the energy to fight the trolls. #failure

But my daughter? My amazing, brilliant, wonderful daughter? The exact opposite. From day one she hit the ground running with posts on Facebook about her bitter disappointment in America’s choice in someone who ran a campaign wrought with bigotry (not to mention choosing a vice president who thinks you can pray-the-gay-away).

But first she came out (literally) with this post on November 9th:

“Hey guys. I need to tell you something. This isn’t shocking at all (i hope), but i wanna officially come out as pansexual. if you don’t know what that means, there are a few definitions to explain it, but mine is a very popular one. basically, I’m attracted to people based off of their intellectual ability and personality. I mean by that is, I don’t really care about what a person sexes or the person’s gender is or whatever they are on the outside. I care about who they are as a person and how they make me feel and how I make them feel and how we just are together I find that more important and much better than how somebody looks over they are on the inside.”

Man, that was hard for me to post. Not because my daughter is pansexual. We’ve always told our children (and meant it), that we don’t care what their sexual orientation is, as long as they’re happy. But did you see those grammatical errors? The lack of capitalization! “Sexes” instead of “sex is.” Frightening!

A few days after the election she came to me and told me that she contacted the LA LGBT center and wanted to organize a march to Donald Trump’s star on the Hollywood Walk of Fame in protest of the election.

“The LGBT center said they’d totally help me and it will take a couple of weeks to plan, so I was thinking December 3rd,” she told me.

“We’re busy on the 3rd,” I told her. “But I guess the 10th would work.” I admired her passion and intensity, but to be honest she’s intense about everything, so I really didn’t think much about it.

She posted the protest as a Facebook event: LGBTQ Protest Against Pence/Trump. She made it very clear that her protest was peaceful and “That we are not going to let these racist, homophobic, bigoted people hurt us.”

Within a few days over 500 people showed interest and over 100 people said they were going. And I have to admit I was pretty impressed, but still. A Facebook event? “100 people going” means 10 will show up. Maybe. It’s a busy time of year full of parties and commitments (plus there was probably a 10 hour sale going on at Macy’s).

And then it started to snowball. Bigly. A week before the event it was shared with over 5,000 people, over 4,000 showed interest, and over 1,000 people said they were going. Someone from ABC news reached out to her. It was getting real.

(Oh shit, I was actually going to have to give up my Saturday.)

“How many people do you think will show up for this thing?” I asked Dave.

And even though there had been many family discussions about it I said, “I don’t even know what we’re going to do. I know she wants to march from Hollywood and Vine to his star on Hollywood and Highland, but then what? Is there some sort of chant? Do we all just hang out there? And what if it gets violent? I mean, what do we do?”

He just sort of shrugged and admitted he was as clueless as I was.

At dinner that night we started talking logistics. Where to park. What exactly would happen. How cool it was that Marley was contacted by ABC. And then she just sort of shut down. “I don’t even know what I’m doing,” she said. “Probably no one is going to show up. I don’t even want to do it anymore.” Anxiety was getting the best of her.

And even though a bonus Saturday in December would have been lovely gift to this unorganized mom who was nowhere near done with her Christmas shopping (and Macy’s was probably having a sale), I said, “It will be awesome. Even if it’s just us, we’ll have our signs and we’ll march. You’re standing up for what you believe in.” But, I have to admit I was a little worried.

It turns out I didn’t need to be. Because this girl? My daughter? The one who can barely get her shit together for school? She was on it. Organized. She freaking rocked it.

The night before the march things started to go wrong, but she handled each road block like a pro and received support from other activists and the police.

First the trolls came out saying awful, hurtful things. (To a sixteen year old! As if their First Lady-Elect’s “fight against cyber bullying” wasn’t ironic enough.) But a lovely man named Ian who’d been to his share of protests, reached out to her and told her she was awesome and told her that trolls were just that: trolls. He messaged back and forth with her all night and gave advice and peace of mind.

She received an alert that Rogue One: A Star Wars Story was premiering at the Pantages Theatre, directly across the street from the Hollywood and Vine Metro station where the march was starting and that much of Hollywood Boulevard was shut down. She and Dave looked at a map and she posted a new route for the march.

She asked the woman at ABC if they would be there and was told that the producer passed on the story, so no. Whatevs! #Sad (I actually think she was relieved.)

A community relations officer from the LAPD got in touch with her and told her that the LAPD supported her 1st Amendment rights and wanted to help to make sure that the protest was peaceful. Marley made a plan to meet with an officer before the protest and a car would shadow us as we marched our route. (This made Dave and I relieved.)

We took the Metro to the Hollywood and Vine station and got there about an hour early, not knowing what to expect. Marley and the co-president of her high school’s Gay-Straight Alliance club met with the police officers and Dave and I stayed back, continuing to let her take charge. She was alerted that there was a pro-Trump group at Trump’s star. A photo journalist introduced himself to Marley when she was done talking to the police. We still didn’t know if anyone would show and had a lot of time so Dave and I decided to take a fast walk to check out the road closures. (I could write a whole blog post about that – let’s just say there were multiple metal detectors and check points and there was a tented red carpet that two blocks long. Star Wars knows how to throw a party!) After about 15 minutes Marley texted me: Mom come back.

We rushed back there were about 40 or so people who had started gathering. The W Hotel (which sits at the entrance of the Metro station) told Marley that her group had to gather on the sidewalk because they were on private property. This meant going through a metal detector. Ian (who is about my age and is beautiful inside and out) found Marley and thanked her, cheered her, and introduced her to all of his friends. The group began to grow. Ian encouraged Marley to give a speech. 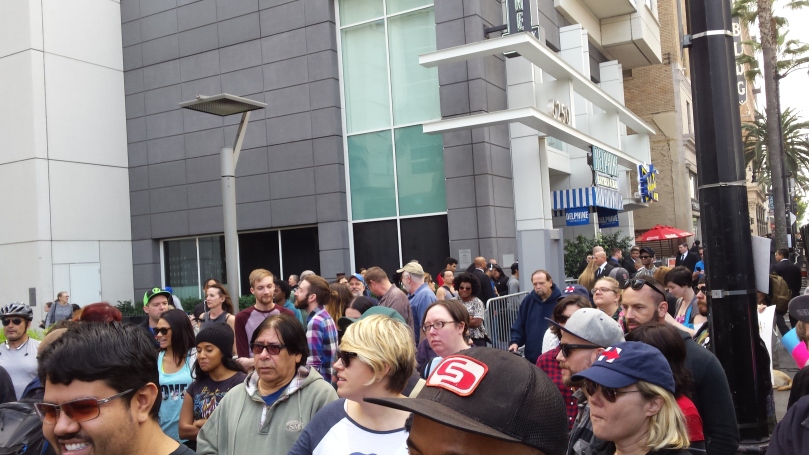 Marley gave a wonderful speech and then her friend gave one. We passed out extra posters the girls made, came up with a few chants, and we started to march. By now the group had grown to about 150 people. As we marched people started honking their horns in support and people walking down the street high-fived us. A couple who was looking for us joined up mid-route. A cute boy at a bar on Hollywood said, “I was hoping to get a cocktail first,” gave up his plans for refreshment and jumped in the march. When we got to the star there were others waiting. We chanted, took lots of pictures, and Marley had a civil conversation with the pro-Trump people. By the end of the protest it looked like there were over 200 people supporting Marley’s cause.

There was documentary filmmaker named Jordan Roberts waiting for us and she interviewed Marley and her friend, and Dave and I as well. People cheered Marley, asked to take selfies with her, and everyone thanked her. Her protest was peaceful and she felt like her voice was heard.

And this mom? The one who didn’t even have it in her to make a Facebook post about it? I have never, ever been more proud.

Photo Credit of Marley at the rally: Susan Forrest via Facebook

9 thoughts on “My Daughter, The Activist”