It’s the most wonderful time of year – Awards’ Season. And of all the awards shows, The Golden Globes are my favorite. (Or is that “is my favorite?”) It’s when two worlds meet and both television and film are honored. It’s when celebrities dress up, get drunk, and have one hell of a good time.

Of course I start watching promptly at 3:00 tuned into Guiliana Rancic and Ryan Seacrest on the E!’s Red Carpet report.

I loved Guiliana’s dress. But she really needs to eat a sandwich. Her arms look like sticks. That chick is way too skinny. (Probably why she chose a ballgown – so you can’t see how emaciated she is.)

Julia Roberts’ dress confused me. It looked like she put a formal strapless gown over a business shirt from her closet. What happened? Was she afraid she was going to pop out the westside sold out of Hollywood Secrets breast tape? Hey I know, instead of risking a wardrobe malfunction I’ll just stuff this shirt from Banana Republic under an otherwise beautiful strapless gown. Waa laa! I am a genius. Project Runway here I com!

Well from the neck up anyway. Because that dress?  NOOOOOOOOOO!!!!!!!!!

I love and adore Drew Barrymore but that dress has got to go. I’ll give her a pass because she’s pregnant and not one of those stick skinny pregnant girls. And I actually like the high-low bottom of the dress. But she needs to have a talk with Kerry Washington’s stylist to see how to walk the red carpet right when carrying an extra person inside of you.

And was it just me or did Amy Adams’ and Julie Bowens’ dresses look oddly similar?

BTW – I say Amy wins this contest hands down. Julie, you have got to lose those 1980’s bridesmaid dress poofy sleeves!

And since I mentioned Project Runway – Heidi Klum? Once again all I can say is WTF? For someone who is a supermodel and the main judge on a show about fashion, she always seems to get her red carpet looks wrong. That necklace overpowers what is actually a pretty dress.

And what is up with that bangs meets Farrah Fawcett hair? You want to know how to wear bangs? Ask Reece Witherspoon. Her bangs were gorgeous. And so was her dress. Simple, understated elegance. No overpowering necklace needed. (Remember, Heidi, sometimes less is more!)

What did I love? (Other than Reece Witherspoon of course?)

Sophia Vergara. Her huge necklace totally worked. Though I do wish she would ditch the blonde and go back to the dark hair. It’s so much more stunning on her. (Though as someone who still considers myself a blonde even though I have been wearing my hair dark for the last six or seven years I totally get it.)

Maria Menounos – love this dress. Sexy and understated at the same time. (And being understated when you’re obviously not wearing any underwear is a good trick!) 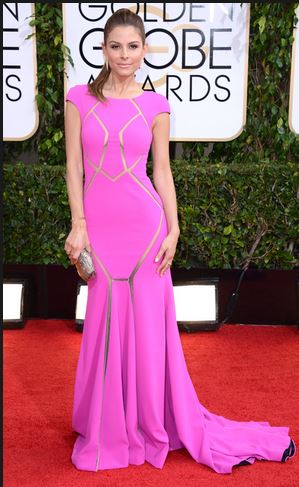 Lupita Nyong’o’s dress was my absolute favorite. She is one of the most beautiful women I have ever seen and this gorgeous, gorgeous dress with the detachable cape was truly a stunner.

(If I were going to add a snarky comment about this photo it would be about the women in the background and their overly sensible shoes, but it looks like perhaps they’re working, so I’ll be nice!)

Margot Robbie’s dress was my very close second favorite. Again, I like things that are simple and this simple elegance was simply stunning. (I know I have to come up with some new adjectives, but I’m really on a time-crunch here!)

And of course Tina Fey and Amy Poeler were not only hysterically funny, they both looked just beautiful. 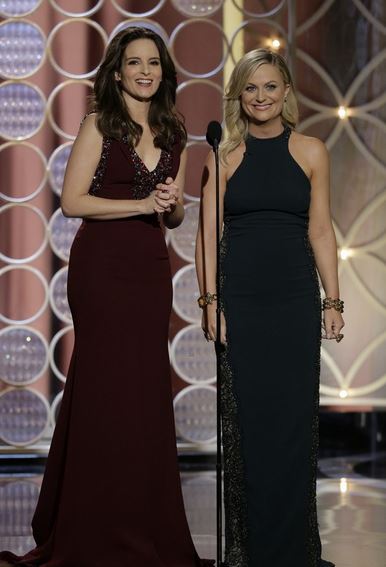 My favorite jokes: George Clooney would rather go off by himself into space by himself than spend one more minute with a woman his own age. (If only George had been there to hear the joke, I think he would have laughed just as hysterically as the audience.)

Also: “For his role in Dallas Buyer’s Club Matthew McConaughey  lost 45 pounds or what actresses call, being in a movie.”

Oh, and Emma Thompson with a martini in one hand and ouchy Louboutins in the other – I want nothing more in life than to be this woman’s very best friend.

And Jared Leto – I loved you as Jordan Catalano, but you really pissed my boyfriend, Bradley Cooper, off when you beat him for best supporting actor. At least he really looked pissed off when you were giving your speech and they panned to him in the audience. (Don’t worry Bradley, I can make you forget all about it.)

And lastly, even more confusing that Julia Roberts’ dress was Sandra Bullocks. Her hair and make-up look exquisite  and again, I love the high low bottom of this dress and the pink on the inside, but I really can’t tell if I love this dress or if it reeks of prom. What do you think yay or nay? This one has me flummoxed.