This is my typical morning routine:

Do my 7 minute workout app.

Go to the gym for a 5:30 class or write. (Translation: go to the gym or fuck around on the internet while doing everything in my power to avoid writing.)

Take Marley to school. (She has zero period and her first class starts at 7AM.)

Take the dog on a two and a half mile walk.

Get ready for work and be at work by 9AM (ish). (I’m really supposed to be there at 8ish.)

But on Monday I wanted to be at work early, so I walked at 6:00 during my workout/ writing time instead of after dropping Marley off at school. And then I remembered that is was finals week. Finals week has a different schedule and the kids go to school later. What time did Marley have to be at school?

We did talk about finals the night before and whether or not Marley was prepared (she swore she was, but I never saw her crack a book over the weekend), but we never talked about what time school started. Or we started to, but never finished the conversation. We must have gotten distracted by a squirrel or something.

I stopped mid-walk and tried to find the schedule on my phone, but either the school’s mobile app doesn’t have that information, or I’m not mobile app savvy enough to figure out how to find it in the middle of a dog walk when it’s freezing outside (45 degrees – BRRR!), so I texted Marley, whose morning routine is to get up at 6:00, grab her cellphone off the kitchen table (because we make her turn it in at 10:00 at night so she can go on her iPad or laptop or whatever and roll her eyes at how stupid we are to think that we are helping her go to sleep at a decent hour by taking away her phone), go back to bed until 6:40, where she takes all of ten minutes to get ready for school so I can drive her, to see if she knew what time finals started. But since she goes back to sleep she didn’t answer.

So I texted my friend Kim because even though her kids aren’t in high school, she’s the Communication Coordinator for the school district, plus she gets up early to actually write, so I figured she’d have access to that information. 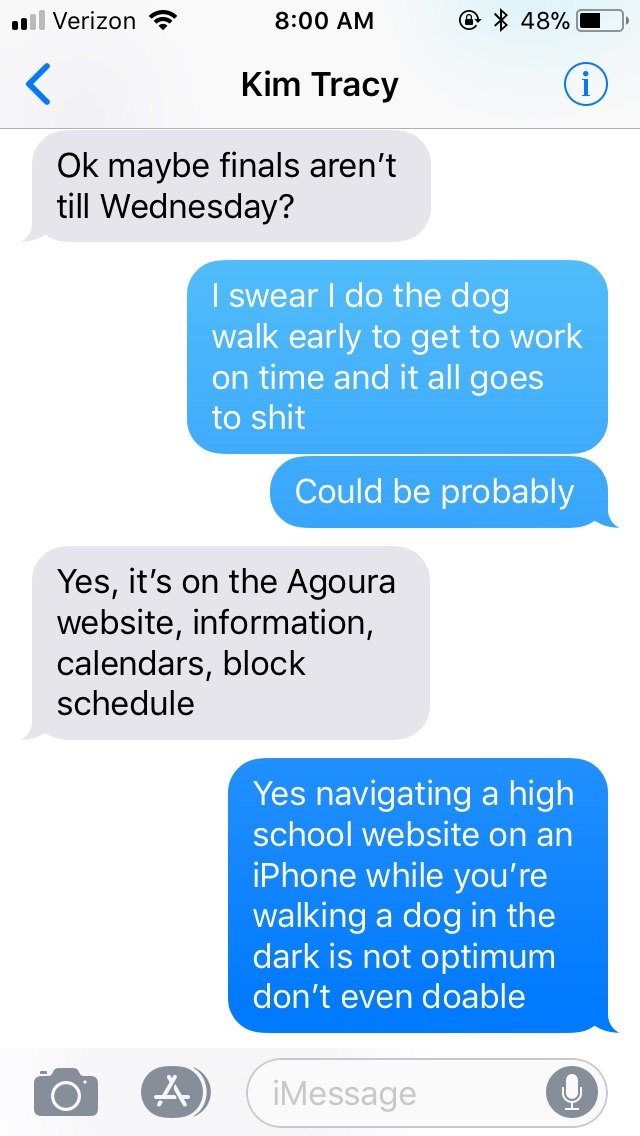 So I was right that is was finals week. But finals didn’t start until Wednesday. And on Wednesday morning when I banged on her door at 6:50AM because she hadn’t come out and was going to be late, she yelled from the other side that her final didn’t start until 7:40 so she was still sleeping.

Even though I swear on Tuesday night (keeping the Monday morning debacle in mind) I asked her what time her first final was. She told me that she thought it was at the regular time, but she would check. She must have checked, but she never told me. And I should have remembered and confirmed, but I must have been distracted by a squirrel. Or something.

So I guess it’s me that’s the unorganized mess. And in five months she’ll be eighteen. I’m not sure she stands a chance.