Yes it’s that time of year again. Awards season has come to an end with its biggest night of the year – the 2016 Academy Awards – and I’m here to give my ever-so-valued opinion on the best and worst red carpet looks. That’s right, I watch and take notes about the good, the bad and the ugly as I sit eating stuffed crust pizza in my Costco workout clothes about Hollywood’s biggest night of the year.

I know what you’re thinking. You’re thinking I could have at least worn my Lululemon. I mean, it’s the Oscars, dress up a little, right? But I only have one Lululemon and it was in the wash.

And why am I qualified to do this you ask (again)? I’ve already told you, I wore the same dress as seven other girls at my high school prom. This obviously means I have excellent taste. So read on about my red carpet takes and if you’re lucky I’ll add my prom picture at the end. (If you’re lucky.)

I’ve mentioned before that as I get older (and damn am I getting older) I really don’t like to be as snarky. I don’t like make fun of people. So I would like you all to know that I’m not making fun of the people. Just their clothes. (Well, mostly.)

Plus it’s hard not to be snarky when Heidi Klum shows up in this:

Seriously, WTF is she wearing. Heidi Klum has become the Cher of the  new millenium. (Old people like me will understand that reference.) She seems to be on my worst-dressed list for every red carpet event. If I was a contestant on Project Runway and got booted off, I might not feel so bad.

This makes me sad because Kate Winslett always makes my best-dressed list, but I gotta call ’em as I see ’em and I see this dress as a disaster. What exactly is it made of? Rubber or something shiny or both? I think her hair and make-up look beautiful, but that dress? No! (BTW, my friend Laurel said she thought her hair looked stringy, and I admit it kind of did at the end of the night, but as someone who never leaves an event looking quite as fresh as when I arrived there, I’ll forgive her for that.)

I don’t know who Lily Cole is (an IMDB search shows that she’s been in a bunch of stuff I haven’t seen), her dress, from the pointy triangles at the top to the awful fabric and overall poufiness has got to go. (Plus her shoes are gold and her dress is silver – NO!)

Rooney Mara looks kind of pissed off in this picture. Maybe her head hurts because her hair’s pulled back too tight. Or maybe she realized what she was wearing is heinous. Seriously, what is she wearing?

As I mentioned above, I’m getting older. We all are. And as hard as it is for everyone, it’s even harder for the women of Hollywood. I get that. So I will forgive Kate Capshaw for the work she has obviously had on her face. Hey, I’m not a rich woman. Plastic surgery will never be an option for me, so who am I to judge. But Kate has always been one of my hair idols. That’s right, I’ve always idolized her fabulous hair. But this stupid too-short-buster-brown-bangs and stripey-blond do? No! That I will not forgive. Plus she wore a tux. Why, Kate, why?

Need a closer look. (You don’t but I’m going to give it to you anyway.)

As for dresses I’m on the fence about. First, Jennifer Lawrence. I don’t hate it, but I certainly don’t love it. What’s your opinon? I just don’t know.

And I really love the top 9/10s of Alicia Vikander’s dress. But that balloony bottom has got to go.

It has occured to me that I rarely talk about men’s walk down the red carpet. That’s probably because for the most part there’s not much to eff up and the men look great (assholes). Well, this year was a little different…

Jared Leto. No! We already know you’re a rockstar and kind of a weird dude, but still. This is a no! I mean you are incredibly hot (and forever Jordan Catalano in my heart) and I wouldn’t kick you out of bed for eating crackers, but I might kick you out for wearing this. Who am I kidding? Of course I wouldn’t. (I would, however, make you take it off first.)

Look at Dave Grohl, he’s a rockstar and he looks great!

Dev Patel forgot to wash his hair. And shave. Clean it up Dev, you’re at the Oscars for godsake!

And what was with all the velvet last night? Too many men were wearing velvet. I have to tell you, I’m not a fan.

Alright already, enough with the negativity and snark. (Even though I know that’s what you’re all here for.) Let me tell you what I did like, because most of the dresses were just breathtaking.

I would have prefered to have seen Jennifer Garner’s hair down, but I still think she looked stunning. I think the inspiration for her dress was “take that Ben Affleck.”

I thought Julianne Moore looked classy and gorgeous, as always.

A lot of the fashion blogs said that Cate Blanchett looked like a mermaid, but I’m not a fashion blogger. I’m an Old Navy-wearing suburbanite. I think her dress is beautiful.

Best Actress nominee Saoirse Ronan is the vision of beauty in this Calvin Klein dress. I love the pattern and the shimmer and her hair and makeup are sublime. 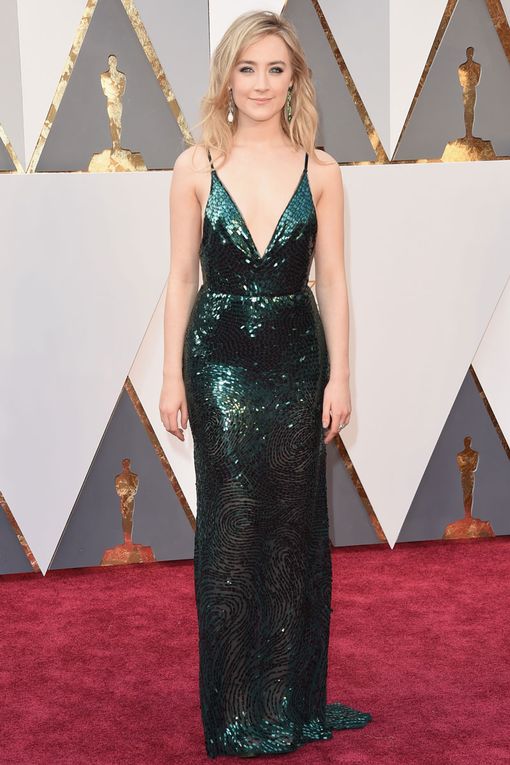 Best Actress winner Brie Larson looks amazing. I especially love the top of this dress. Her hair and makeup are simple, yet gorgeous.

Naomi Watts has made my worst dressed list in the past, but this year? OMG, OMG, OMG! Her dress is amazing. I think it’s my favorite. Everything about it (I absolutely love the color gradation) is absolutely 100% gorgeous! Oh, and that necklace? I want it!

But I do have to say as far as the WOW factor goes. As in wowzee-wow-wow-wow, Charlize Theron stole the show. (And I want that necklace too!)

My sister told me I had to post a photo of the most beautiful man in the world, but I told her Bradley Cooper wasn’t there. She said that she meant Tom Hardy. I could only find a photo of him with his wife, Charlotte Riley, who unfortunately for my sister, looks absolutely stunning. (Sorry sis!)

I’d love to talk about what went on inside the awards, but my word count is ridiculously high, so I will just mention Lady Gaga’s performance which left me with tears streaming down my face. It was so powerful and so moving. If you have not seen The Hunting Ground, I suggest you do. It’s an important film that everyone needs to see. Especially if you have a child in college or that one day will be going to college. Click here to find out how to watch the film and click here to bawl your eyes out watching Lady Gaga sing the Oscar nominated song Til It Happens to You.

Wow, that got serious all of a sudden, didn’t it? Sorry, that was just something too important to breeze by, but I’ll end this post on an up note (at my expense) with that prom picture I promised you. I couldn’t find the one with me and my date, but here is one of me and my friend Kellie.

OMG – that hair! That taffeta! Go ahead and snark away. I totally deserve it!

Photo credits: Most of my photos were taken from here, some were from here, and the close-up of Kate Capshaw and Steven Speilberg is from here.